First Credit Union & Insurance117 employees on Do Some Good
First Credit Union is the oldest credit union in BC, incorporated in 1939. We are proud of our history; over 75 years ago we started in Powell River with a handful of members an...

We're committed to giving back to the community!View the Pledge
4448A Marine Avenue.
Powell River, British Columbia
V8A 2K2
604-489-2006
http://www.firstcu.ca
marketing@firstcu.ca
Causes we care about

Organizations our employees volunteer with

Powell River Minor Hockey
See all organizations...
What people are saying about us
DL 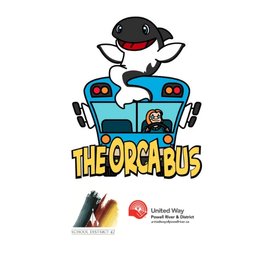 On a provincial level, Credit Unions of BC is a huge partner of Success By 6! But on a Community, level Powell River First Credit Union has also Supported Success By 6 and the ORCA Bus Project since it's inception! They too believe that building strong children will create strong adults. Over the years they have donated funds, supported our coordinator as a partner, provided space for the Little Green Book Shelf, employees have volunteered their own time, and so so so much more! We thank you from the bottom of our hearts!

Stories of our community involvement 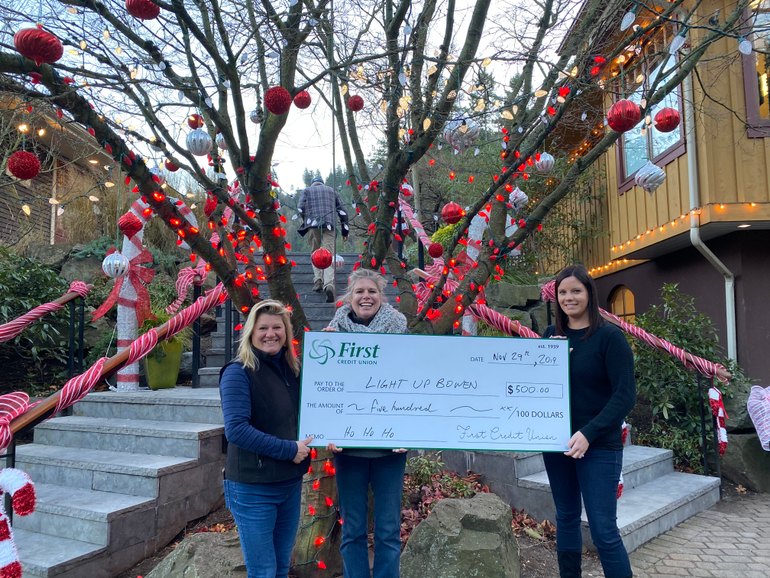 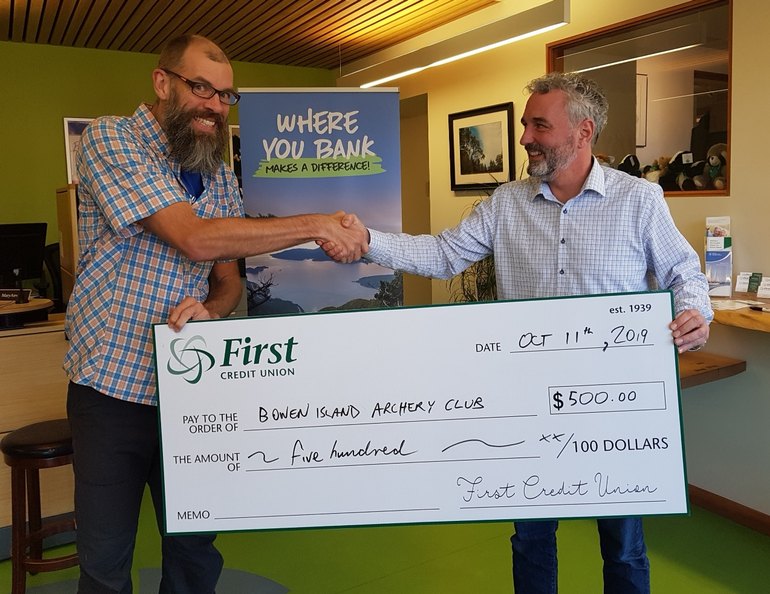 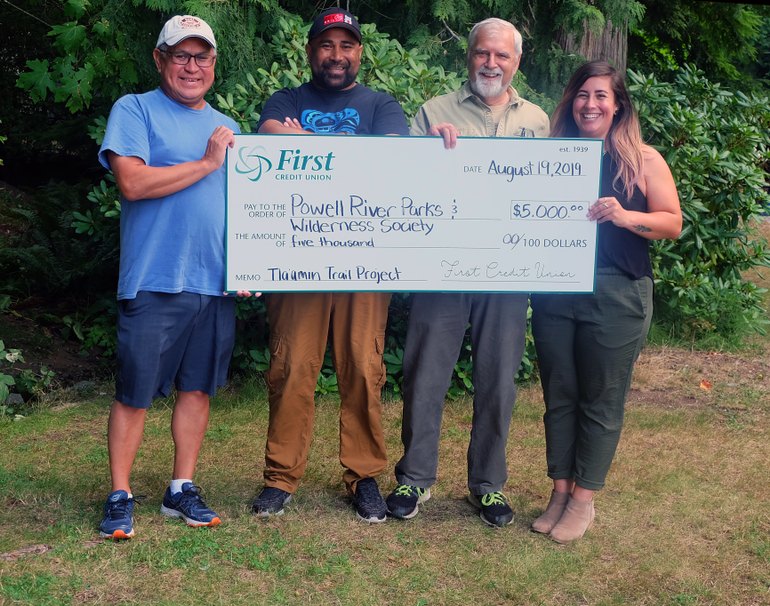 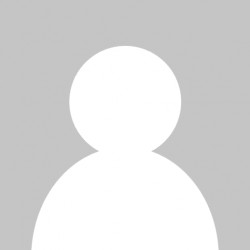 Helen TheilmannPowell River - 3mo
This past August First Credit Union was proud to partner with the Powell River Parks and Wilderness Society (PAWS) to sponsor and help with the creation of a family friendly trails system in the Tla’amin community. The trails explore the Tla’amin region and are accessible at various locations throughout the community, they can even act as an extension of the Sunshine Coast Trail for the more casual hiker. The purpose of this project is to create a basis for eco tourism, community health, and to help create a resource to support the community.
The trails welcome everyone; locals, visitors, tourists, and patrons of the Sunshine Coast Trail alike are encouraged to explore the area and the local businesses in the community.
This was exciting for First Credit Union as it supports our vision of ‘building financially healthy communities’ and creates community partnerships as well as a place the whole community and surrounding areas can enjoy.
Watch for the new trial head kiosk maps, and the long lasting and environmentally friendly aluminum trail maps and way finding signage that will be installed along the trail! You can find out more about the trails system on the Sunshine Coast Trail Facebook page (https://www.facebook.com/SunshineCoastTrail/).
Show more... 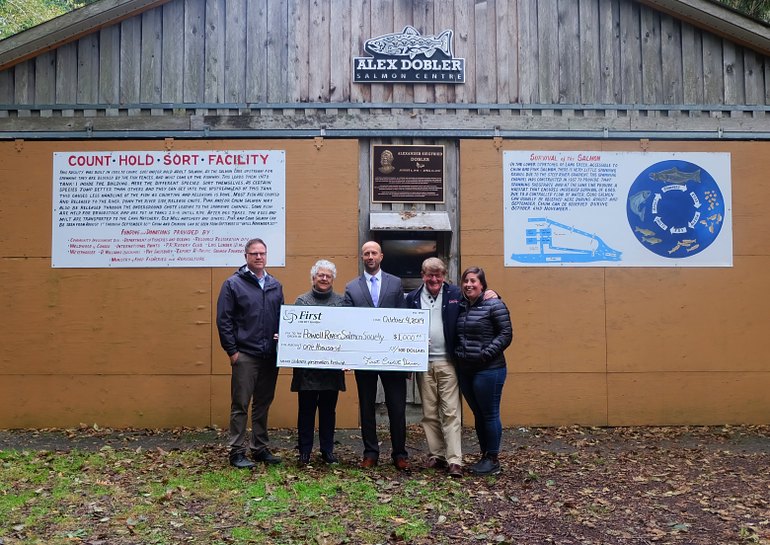 First Credit Union & InsurancePowell River - 4mo
First CU (Powell River) is thrilled to make a donation towards the Powell River Salmon Society's upcoming Salmon Preservation Festival!
The first annual event is happening on Saturday Oct. 19th from 11am - 3pm at the Lang Creek Alex Dobler Centre. Learn how important salmon are to the ecosystem with hatchery operations tours and demonstrations and presentations from the Salmon Enhancement Program and Ocean Wise coming all the way from the Vancouver Aquarium! The Orca Bus will also be on site to entertain and educate the littles!
https://www.facebook.com/events/...
Show more... 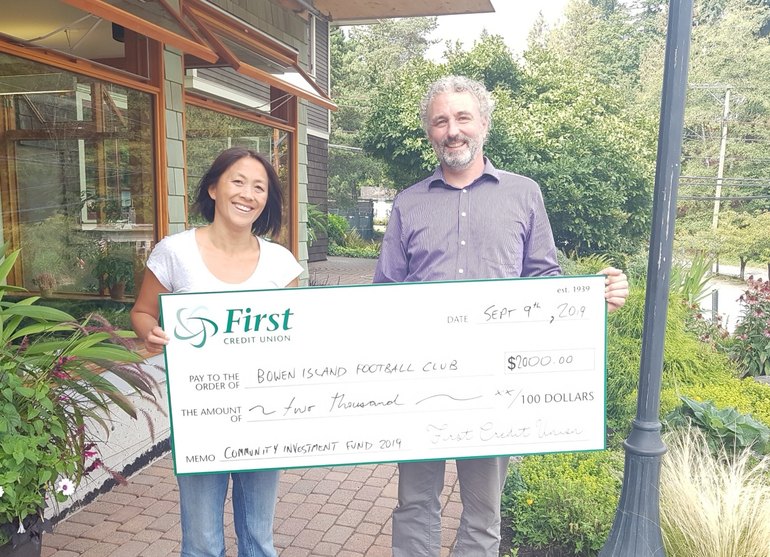 First Credit Union & InsurancePowell River - 4mo
Congratulations to the Bowen Island Football Club who were the recipients of the $2000.00 2019 First CU Community Investment Funds (on Bowen).
Need more football (soccer) in your life?! Find them at http://www.bowenfc.com/ 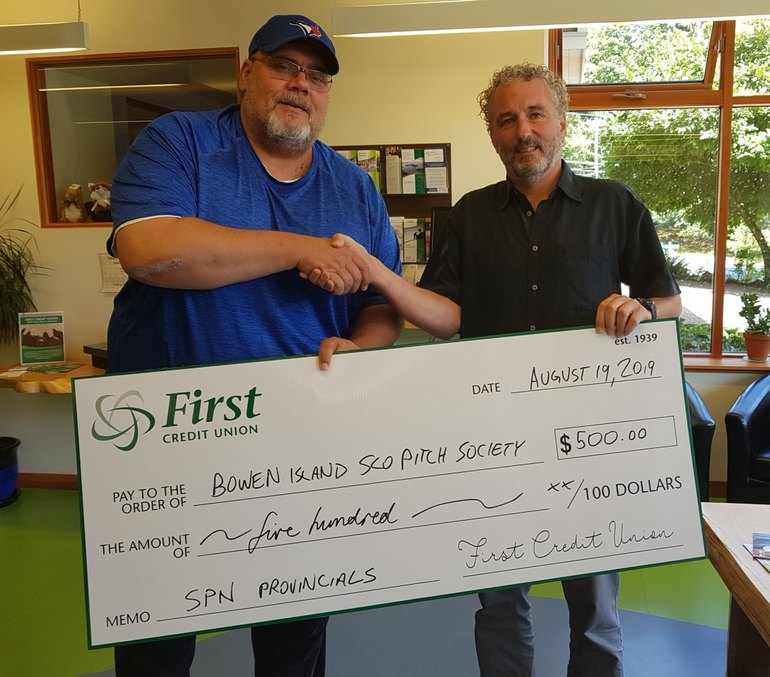 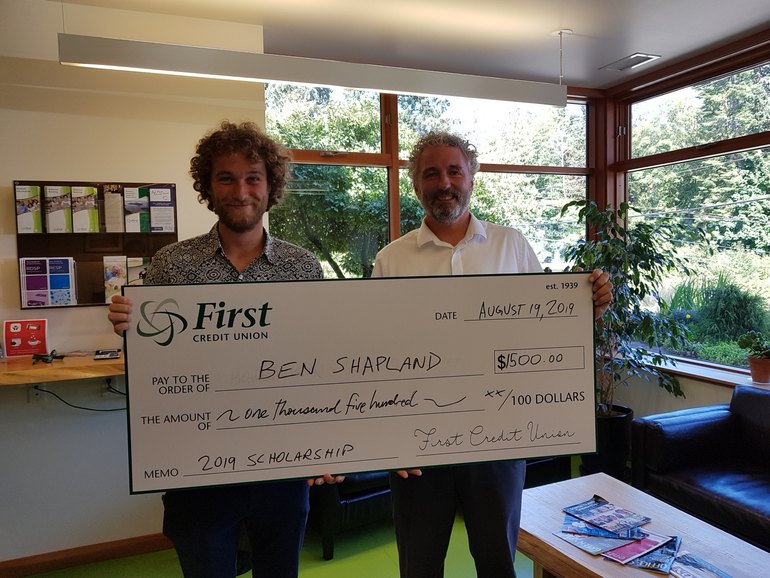 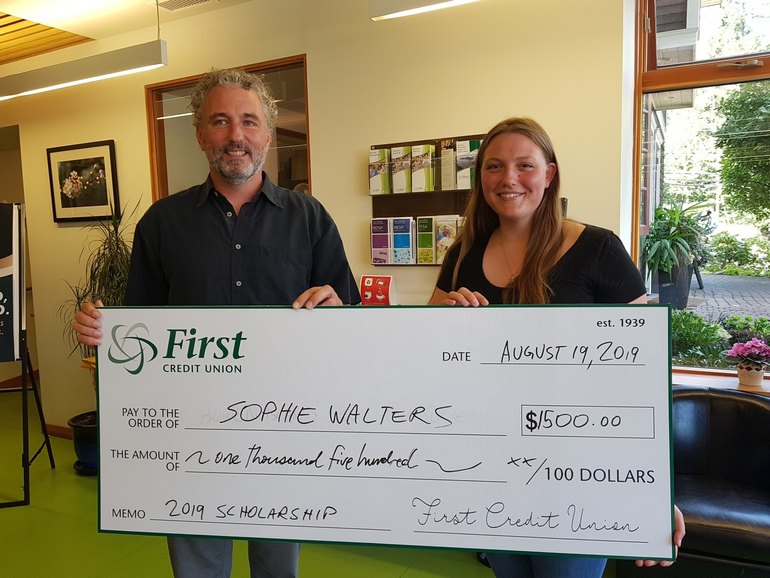 First Credit Union & InsurancePowell River - 5mo
Congratulations to Sophie Walters, recipient of our 2019 Scholarships on Bowen Island (pictured here with Branch Manager, Kevin Manning). We wish you all the best in your studies, Sophie! 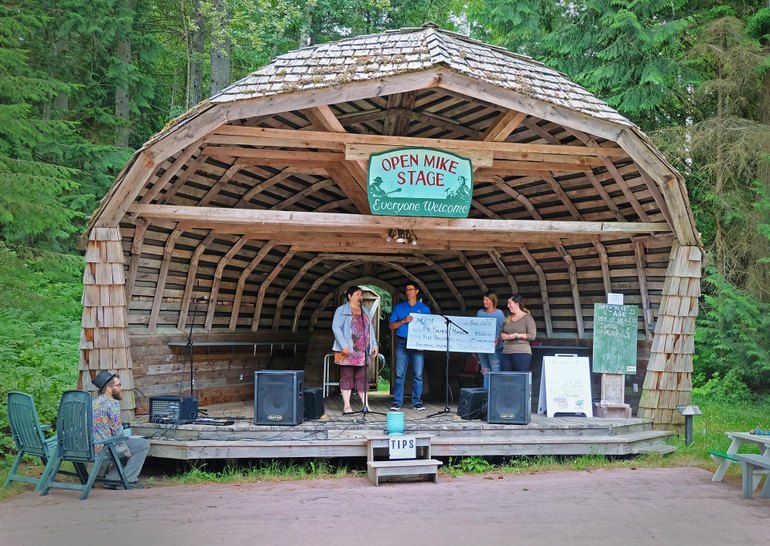 First Credit Union & InsurancePowell River - 7mo
This summer the Powell River Community Impact Funds were awarded to the fine folks at the Powell River Farmers' Agricultural Institute for their electrical upgrade and expansion project at the PR Farmer's Market! The $5000.00 is going to mean that they can bring electricity out to more vendors... and you know who needs electricity at the Farmers' Market, right? Food vendors! Ice cream, Syrian food, baked goods, pasta, popsicles and so much more -- we love all the vendors at the PR Farmers' Market but we definitely have a soft spot for the yummy food. Keep an eye out out for a bigger and brighter market in the coming months!
Show more... 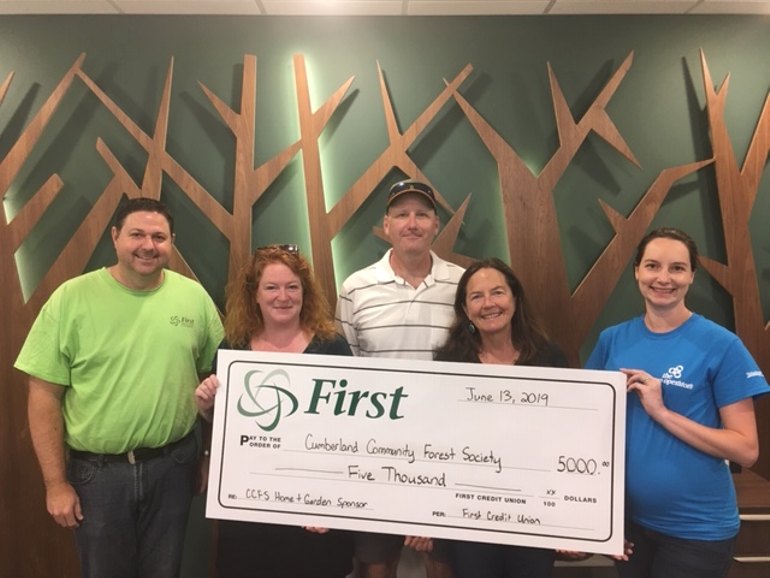 First Credit Union & InsurancePowell River - 7mo
First Credit Union & Insurance is excited to once again sponsor the Cumberland Community Forest Society's (CCFS) Home and Garden Tour. The Home and Garden tour took place on June 15 with another strong turn out. Thanks to our lead sponsorship, and others, all proceeds from this event go directly to the CCFS. Photo includes: Craig Keeping Branch Manager - First Credit Union, Meaghan Cursons Executive Director CCFS, Evan Gough Chair CCFS, Caroline Tymchuk Treasurer CCFS, Caylyn Moyls Manager - First Insurance/Co-operators.
The Cumberland Forest is part of an interconnected system of forests, salmon bearing creeks, wetlands and riparian areas adjacent to the Village of Cumberland on Vancouver Island in the traditional territory of the K’omoks Nation.
This forest is an integral part of both the Trent and Puntledge Watersheds, feeds Comox Lake, and forms a critical link in an extensive habitat corridor that connects mountains and lakes to the Salish Sea. This forest is all scheduled to be logged.
The Cumberland Forest has given a great deal to our community. Cumberland was built on logging and mining and the Cumberland Forest was a base for both activities. Today an extensive trail network winds its way through the area that is enjoyed by hikers, mountain bikers, runners, naturalists, children and families, school groups, artists and many others.
The Cumberland Community Forest Society was formed in 2000 with the mission to purchase and protect the Cumberland Forest for its ecological, historical, economic and recreational values. Guided by the shared belief that this forest is now worth more to our community standing than as timber, the society is supported by hundreds of donors from Cumberland and beyond.
To date the society has purchased 110 hectares of forest and placed it under a conservation covenant to ensure its future protection. Our most recent purchase was in 2016 when a 36 hectare area known as Space Nugget was purchased outright by the community.
But we’re not done yet! We’re currently working to purchase and protect another 93+ hectares of forest, wetlands, riparian areas and heritage landmarks along Perseverance Creek.
https://www.cumberlandforest.com...
https://www.cumberlandforest.com...
Show more...

We're committed to giving back to the community!View the Pledge
4448A Marine Avenue.
Powell River, British Columbia
V8A 2K2
604-489-2006
http://www.firstcu.ca
marketing@firstcu.ca
Causes we care about

Organizations our employees volunteer with